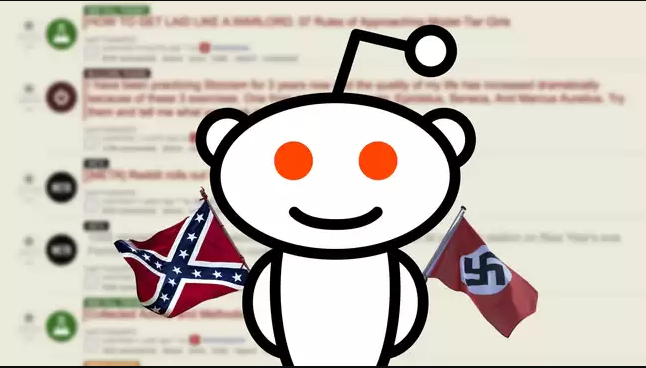 According to Reddit – “r/all has the most active posts from all of Reddit. Come here to see new posts rising and be a part of the conversation”.

This may seem a bit harsh but… THAT IS A TOTAL LIE.

FIRST, Reddit says the most active posts show up here; but if that were really true, then r/funny would dominate the Front Page, because it has the most users on all of Reddit. The truth is, Reddit does not show the most active posts – it shows the posts that have the most potential to go viral. That way everyone can have a good time on Reddit and spread some good publicity for the site.

SECOND – Reddit says they take posts from all over the site, and it may seem that way at first… But there are hundreds of subreddits that – NO MATTER WHAT – will never be on Reddit’s front page. For example, pretty much any subreddit with the word “Hate” in the title. Like r/SJWHate. Even if that subreddit was going viral, Reddit would never allow anything scandalous to be on the front page. Its bad for business, and its just ASKING for trouble

So – don’t trust Reddit on this issue. Remember – Reddit is a business, not your friend. If you want to end up on r/all, you’d better help their business.

NOW – FIVE STEPS TO GET ON REDDIT’S FRONT PAGE

You need to get AT LEAST ten upvotes very quickly after you post. That shows Reddit people are interested in your topic and like it a lot. And try to avoid downvotes as much as possible!

As a general rule, the more people on Reddit – the more likely people will click your post. For example, a lot of people use Reddit from 6am-8am on a Sunday. They don’t have work, they just woke up, and they’re probably going to hand out upvotes easily. You may also want to take TimeZones into account. Over 40% of all activity on Reddit, happens in America. So you may want to post when its 6am in the USA, for the maximum audience impressions.

There are multiple things people have noticed about reaching the front page, that we don’t exactly have evidence for. I’ll use a time I got on Reddit’s front page as an example. I posted to the Hey Arnold Subreddit, some fan art, that people liked. I quickly got over 20 upvotes, and ended up on r/all. Chances are – 20 upvotes on r/funny, would mean nothing. But because I rose to the top of a small subreddit, I got on r/all…. BASICALLY – That was an [unusual amount of upvotes] in the group, so I ended up on the front page. Also, everyone who saw the post, liked the post. Which means it was popular among the group and appealed to everyone.

You think Bill Gates is sitting around on Reddit? HELL NO!

Reddit is mostly left wing, unfulfilled, vain, westerners. I’m not trying to insult anyone, I’m just stated facts. People with happy and busy lives, don’t play on Reddit. People who are humble and kind, don’t start internet arguments. And people in the 3rd world, don’t care about your garbage memes. I’m sure there are exceptions, but these are GENERAL RULES. So know your audience.

Or at the very least, know your website! The COMPANY of Reddit, is undeniably left wing. With their CEO targetting Donald Trump Supporters on the site, and their parent company donating thousands of dollars to Democrat Candidates…So let me make this clear – DON’T HATE THE PLAYER – HATE THE GAME. And Reddit is a left wing place. So if you jump on and try your “TRUMP REX CRAZY LIBS YO!!” – Your chance of getting on r/all, is ZERO.

Don’t link your blog, no one cares about that. You need something not too controversial! Something that FEELS new and different, even when its not! You need to use imgur! It was created by a redditor for the Reddit community. And is the most trusted website across all of Reddit.

Look at what normally ends up on R/all. Puppies, Memes, cool pictures. Some left wing politics here, maybe an inspirational quote over there.

Look how old this celebrity got! Look at this thing people suddenly like! At first it was avengers posts everywhere, now its Stars Wars.

And of course – if it is a TV show or movie – Its the most inoffensive thing around. Otherwise, it would be downvoted. Think – THE OFFICE. Everybody likes The Office. Its inoffensive and quirky and everyone can jump in and say – “Omg I’m such a Pam” – “Haha I’m such a Jim” – when really they’re 400 pounds and alone typing hours into Reddit.

Just remember to exercise some common sense by targeting widespread interest groups, and you’ll be fine.

So those are the five steps to getting on Reddit’s Front Page. Go ahead and like the article if possible, and I wish you luck in your future Reddit endeavors! Ciao!

SPECIAL!
DEMOCRATIZING NEWS!
“Japan hit by atom bomb”
Register
Log In
Be part of something bigger! Linkyou is the News Platform Edited and Curated by people like You. We are policially unaligned, so, you will definitely have your say on our sites. Linkyou allows you complete anonymity by not recording any and all IP addresses. Frankly, you don't even need an email address to sign up.
Featured, Staff picks, Technology
#Advice#Promotions#reddit#Reddit Front Page#Search Engine Optimization#SEO
Advice, Promotions, reddit, Reddit Front Page, Search Engine Optimization, SEO
About the Author
WarmPotato

× You need to log in to enter the discussion.
Latest Posts
What is Matte Paint & Why is it Popular?
No More No-Go Zones: The Policy & Narrative On Migrants Is Cha...
Germany: Massive Birthrate Drop In 2022
Salvini Warns of Coming Brown Tidal Wave & New Pandemic Hoax I...
We Need To Talk About The Slavs
Germany: Guy Gets Jabbed 87 Times…Or Did He?
Will Smith Is Only A Bit More Cucked Than The “Dissident̶...
Advertisement
Advertisement
Latest Reviews
Try a different filter
Advertisement
Recommended& Related Posts
redditFeaturedStaff picks