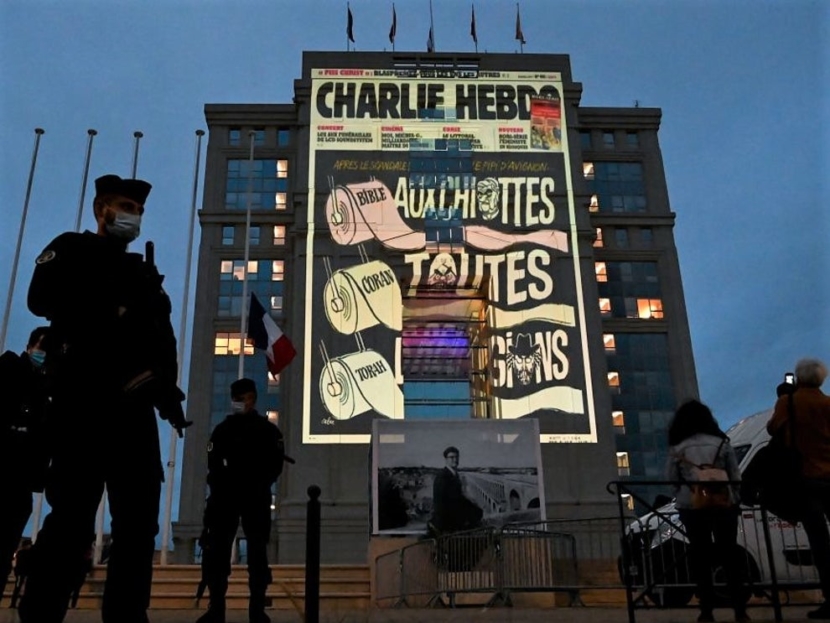 So you probably heard about that French school teacher who lost his head after showing his class cartoons of Mohammed?

Well as a sign of “solidarity” or something, the French government projected images of Charlie Hebdo cartoons on the side of government buildings.

Would this have happened in 2017 in France? Definitely not; they were quite busy clamping down on Islamophobic racists. Actually, I don’t think this would happen in most countries right now even and this is happening under Macron’s government. But times are changing and I expect it will soon be okay to criticize “Islam” everywhere.

As I’ve been arguing with on Dissenter about for the past couple days: This isn’t because “the left” has suddenly changed its position on migrants or something, but because Islam itself is what Polar Girl would refer to as a “Golem”.

When I asked the person I was arguing with why white, Slavic muslims never seem to do the kinds of things the Arab and African ones do, I was hit with the expected “white is just a skin color” line and he provided me with an image of Turkish muslims as supposed “proof”.

The truth is the globalists are readjusting their strategy to focus on “wrongthink”. It is merely liberalism by the backdoor. Essentially, we appear to be moving into the “It’s okay to hate Islam, just not the people who are responsible for it” phase of the Great Replacement.

Because as they have learned, making the conversation about “ideas” distracts one from asking the real question: Why are all these Arabs and Africans here at all? Instead, it makes it seem like the problem isn’t that your country is overrun with fast-breeding non-whites while you decline, the problem is this religion, this set of “beliefs” they have, and we just need to suppress those thoughts, and everything will be fine.

I recall that in Norway, there was some lecture being given by a woman to a group of “New Norwegians” about how raping women is bad and not to do it in one of the many anti-rape courses for migrants. She was promptly raped by one of the students after class.

So he presumably got an “F”.

So there is no reason to believe that this can be “Educated” out of them. Religions are very much a product of the people from whom they originated and who command them, as culture is downstream from race. Islam very much seems to be an effort from Arabs at containing their own nature and truth be told, they’d likely be even worse without it.

But even if these bad behaviors could be educated out of them, why does it matter?

Why do Africans, Arabs, and every other not-French person need to live in France at all?

Until that question is seriously considered, nothing is likely to change for the better.

SPECIAL!
DEMOCRATIZING NEWS!
“Marilyn Dead”
Register
Log In
Be part of something bigger! Linkyou is the News Platform Edited and Curated by people like You. We are policially unaligned, so, you will definitely have your say on our sites. Linkyou allows you complete anonymity by not recording any and all IP addresses. Frankly, you don't even need an email address to sign up.
Europe, News, Politics, Politics& Government
#White Nationalism
White Nationalism
About the Author
Holyphonic

× You need to log in to enter the discussion.
Latest Posts
What is Matte Paint & Why is it Popular?
No More No-Go Zones: The Policy & Narrative On Migrants Is Cha...
Germany: Massive Birthrate Drop In 2022
Salvini Warns of Coming Brown Tidal Wave & New Pandemic Hoax I...
We Need To Talk About The Slavs
Germany: Guy Gets Jabbed 87 Times…Or Did He?
Will Smith Is Only A Bit More Cucked Than The “Dissident̶...
Advertisement
Advertisement
Latest Reviews
Try a different filter
Advertisement
Recommended& Related Posts
White NationalismEuropeNews